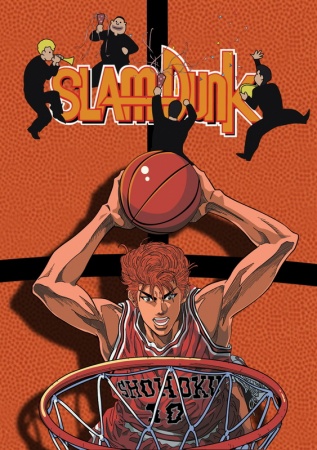 The hero of the piece is Sakuragi Hanamichi, a loud-mouthed, red-haired guy who has been rejected by girls 50 times in junior high. He meets the latest girl of his dreams, Akagi Haruko, and falls madly in love with her. He even goes so far as to join the basketball team to impress her, even though he knows nothing about the sport. But soon, he realizes that he truly loves basketball and he has talent for it. He's bitter rivals with Rukawa Kaede, both on the court and out of it, because Haruko worships the ground Rukawa walks on, though he hardly notices she exists. The other main characters are Akagi Takenori, Haruko's older brother who is also the captain of the team; Miyagi Ryota, who is in love with Ayako the team manager; and Mitsui Hisashi, a third-year former MVP (Most Valuable Player) who has been away from basketball for two years. Together, these unlikely misfits aim to transform Shohoku from a little-known team to the champion in all of Japan.